Erickson currently has a 7.83 DIPS ERA, which is 398th out of 423 ML pitchers according to ESPN as of May 10th. Unlike almost everyone else, I'm not ready to jump on the "Dump Mr. Lisa" bandwagon yet. (Emphasis on "yet") Here are some of his numbers.

Erickson's walk rate is not high compared to the NL average (3.5) and the Dodgers average (2.8). He's not striking anybody out, so the ball is going into play frequently, but he's keeping the ball mostly on the ground as he has done throughout his career. When the ball does go in play...

11.3% line drives given up, 72.4 defensive efficiency (from Hardball Times)

Believe it or not, among NL starting pitchers, Erickson is ranked fourth best in avoiding line drives. (!!!) Historically speaking, line drives become outs about 25% of the time, while groundballs and flyballs are converted into outs about 75% to 78% of the time. In this sense, Erickson actually looks good! But is it? The average line drive rate for NL pitchers with at least 50 innings last year was 18.7, with a standard deviation of 2.4. Erickson's low line drive rate is bound to go up, if he continues to get innings.

"I think I was much better than the results indicated, and I'm sure the coaches would say the same thing," Erickson said. "A lineup like that is a tough one to give extra outs to. I don't think many pitchers can be effective when they get outs that don't turn into outs." Daily News, 5/11/05

The following is a graph of the 74 NL starting pitchers in terms of line drives given up versus defensive efficiency, which is a percentage of outs when the ball goes in play. The dark blue dot represents Erickson, and the 4 light blue dots represent the other Dodger starters. Elmer Dessens was not included with his single start. 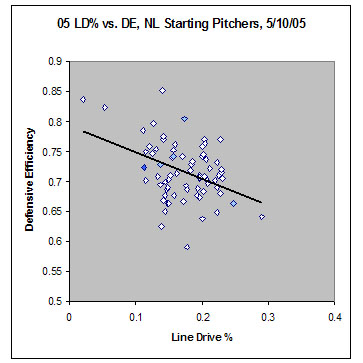 A quick eye-balling of the graph indicates that the defense hasn't helped Erickson out relative to the other starters, but not outrageously so. (Brad Penny is the highest light blue point, and so must be the beneficiery of a terrific defensive effort so far.)
And now back to the ugly...

Ouch. Out of 74 NL starting pitchers, Erickson is 6th worst in HR/9 and 4th worst in HR/Flyball as of May 10th. The league average for HR/Flyball is usually around 11%. Here's a graph that compares flyball % versus the adjusted HR/9 rate (strikeouts removed) when the ball goes in play. 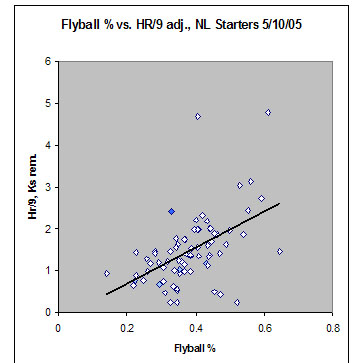 Erickson usually keeps the ball on the ground, but when the ball does get in the air, it's leaving the yard at an alarming rate. Bad luck? Sample size? Or are the balls simply being mashed? Possibly all three. If they're getting mashed, what is the quality of the opposing batters? According to Baseball Prospectus on May 12th, Erickson has so far drawn a tough set of opposing hitters.

The differences may look small, but that's about a half a run difference expected per 9 innings between Erickson and Weaver. Assuming that Erickson stays in the rotation, this should even out eventually.

So it's possible that Erickson will give up fewer homeruns. He might allow more line drives, but should get better defensive support. He'll also probably walk a few, and maybe the strikeouts will go up - it can't go much lower. So what does Erickson need to do in his next start?

KEEP THE STUPID BALL ON THE GROUND!
# posted by secondhandsmog @ 1:40 PM

You mean there are five pitchers *worse* than Scott Erickson??

I just read your post a little more carefully. What I do not hear you saying is that Erickson should not be given another start. After reading your post, I'd be willing to give him one more chance.

thanks for reading carefully. that was my main point - erickson deserves another chance. i'm not hoping for an ace, just a #5 starter who eats up innings.

i just changed a few words in the first paragraph to make my main point more clear....