I compared the line drive rate given up by the pitchers to the team's defensive efficiency 13 games into the season. The defense looked barely average back then. It's now two weeks later, and here is the new graph, as of 5/5/05. The data is again from The Hardball Times, and is "raw" - unadjusted for park effects, etc. As before, the blue dot is LA, and the red line is the 04 NL trend line. 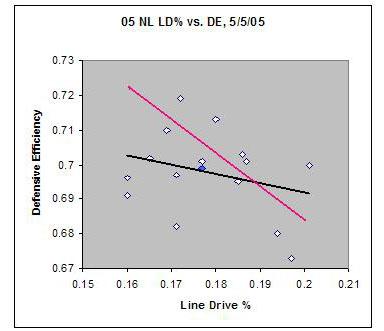 As expected, the line drive rate is no longer 13% as it was 13 games into the season. The defensive efficiency has correspondingly dropped from 0.740. Once again, the defense is looking barely average.

Comments on some other teams:

Florida (17.2%, 0.719) represents the highest point on the graph. Combine that defense with a park that is unfriendly to HRs, a power pitching staff, and a lineup that added Delgado in the off-season. They're my pick to finally unseat Atlanta for the NL East division crown. With Burnett healthy and in his walk year, their time is now.

Chicago (19.7%, 0.673) represents the lowest point on the graph. (Aramis and Jeromy, take a bow.) Fortunately for them, their pitching staff has had the highest strikeout rate (8.4 per 9) in the league, so fewer balls have gone in play. But with Wood out for a while, the K rate figures to drop. Bad defense, no bullpen, one of their 3 aces out...Baker's brushing up his resume.

The Yankees (18.9%, 0.655) are the worst in both leagues, as was the case 13 games into the season. Their strikeout rate of 5.6 per 9 is also near the bottom. Balls are going into play a lot, and they're not being caught. Trouble brewing in the Bronx...

The team defense independent ERA stands at about 4, which is slightly better than the league average. The strikeout rate is near the bottom at 5.7 per nine 9, but at least the pitchers are not giving out too many free passes. (2.6 BB/9, lowest in the league) The 3 sinkerball SPs are contributing to a 1.46 ground/flyball rate, and the infield defense might be better now that 3B Nakamura, the 5 time Gold Glove winner in Japan, should get more playing time with Valentin out. (Although to be fair, Valentin was looking better with the glove recently. )

Whether Nakamura can justify a starting spot is another matter, given his cartoon swing. If not, Robles, Edwards, someone via trade...

Penny has come back strong, Alvarez is settling in, and Gagne looks to be back mid-May. Strikeouts should go up, and the infield defense should be better with Nakamura. (for now)