Below is a graph that represents the difference in total attendance between last season and this season. 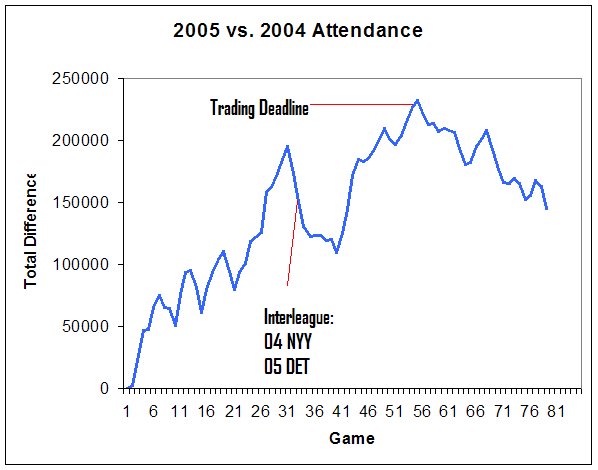 What a difference a year makes. It sure looks as if the fan enthusiasm that carried over from last year's playoff appearance died right around the end of July. Funny, that's exactly how I felt. There was little activity at the trading deadline this year amongst all the clubs. But when the Dodgers stood pat that seemed to ensure a slow death 'til the end.

The recent turnstyle count has to be way, WAY lower than the official attendance figure. All the lost concession sales, parking fees,...it's hitting somebody's wallet.

The greatest Dodgers game that I ever saw as it unfolded wasn't Game 1 of the 88 World Series. For whatever reason, my TV screen went fuzzy just before that game, leaving me in a sea of curses. Fortunately, the audio still worked so I could "see" through the words of Vin Scully. So there I was screaming and yelling when Vin exclaimed "Sheeee is gone!" as Gibson hit the homerun - staring at a TV screen filled with black-and-white static.

Last year, I was stuck at work on the Saturday that Finley hit the walk-off homerun that clinched the division. All I had was a small radio and GameDay. Again, happy with the win but bitter about missing the moment...

The most memorable game that I did catch was a while back. It was an afternoon game on TV, and the Dodgers had slowly fought back. R. J. Reynolds then laid down a squeeze bunt in the 9th to win the game. A SQUEEZE BUNT! I distinctly remember a shot of the celebration that ensued on to the field and in the stands. Lasorda jumped out from the dugout with his hands in the air as if he lost his mind. I too was jumping up and down, absolutely shocked at the play and deliriously happy.

That game was on 9/11/83. Thanks to Dodger Thoughts for bringing back some good memories.
# posted by secondhandsmog @ 12:01 AM 0 comments

Life As A Raptor

Meet Jason Mooneyham, a 40th round pick this year.

Baseball Prospectus currently lists the Dodgers' likelihood of making the playoffs as about 1.5%. Great.
# posted by secondhandsmog @ 8:10 PM 1 comments

Milking It For All It's Worth

To think that I wolfed down 50 chicken wings and a pitcher of beer a few years ago over a mere $20 bet...

The Marlins batboy who was suspended for 6 games for accepting the milk dare from Brad Penny will attempt the same feat for an online gambling website. (Thanks to Gaslamp Ball for the link.) Bettors can witness the action live via a video feed on 9/11. (Insert joke here.)

Our Enemy Plays For Texas Now

If the Dodgers lose the division by a few games to the Padres, I'm blaming Phil Nevin.

It was he who invoked his no trade clause and blocked the trade that would have sent Sidney Ponson to San Diego in July. Instead, Nevin accepted a trade to Texas that sent Chan Ho Park to the Madres.

Park is currently 4 -1 for his new team, albeit with an ERA around 6. Call it luck or whatever, but wins are wins. Park has been serviceable.

Meanwhile, the Orioles gave up on Ponson and his 6.22 ERA and released him a few days ago. In August, he gave up 11 earned runs in 7.2 innings before going on the DL, and shortly afterwards racked up his second DUI of the year. At least he didn't attack a judge this time.

Nevin's refusal to go to Baltimore might have cost the Dodgers a few games in the standings already. Bastard.

This is the same Phil Nevin who did not sign out of high school when the Dodgers drafted him in the 3rd round in 1989.