We Traded Piazza For Whom?

Some quotes over the years from Mr. Bubbly himself.

"We get paid a lot of money just to play baseball, and Mondy's got to realize that Davey is the manager and Kevin is the GM... You just can't have this. I'm sure there are millions of guys out there who would love to do what we're doing."
- Regarding Mondesi's antics in 1999. Sniff, sniff.

"...here I am, their biggest player, and I'm fifth on the team payroll? I don't want to be portrayed as a greedy athlete, but let's be fair about this... I'm getting less than Dreifort? I'm getting just $3 million more than Carlos Perez? It's not my fault they signed Perez to that stupid contract..."
- 2001 before being traded to Atlanta.

"If I'm not happy, you don't want me on your team, period... That's just the way it goes. That's life. I have to deal with what they dish out, they got to deal with what I dish out, period. That's just the way it's going to be... I'll ask for everything... You're going to inconvenience me, I'm going to inconvenience every situation there is."
- Recent comments on trade rumors to the Mets. 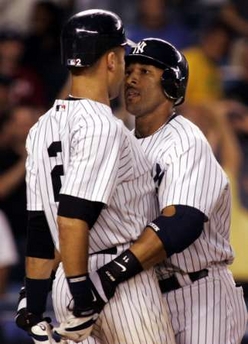 Find the #1 song on the day you were born.

Warning: May Make One Dizzy

EDIT: Where Is The Love For Bill Plaschke?