It seemed clear about a month ago that the #1 trade possibility was for starting pitching. Since then, Bradley has gone on the DL, Ledee hurt his hamstring, Gagne is out for the season, and Bako is also done for the year. Drew has missed a few games with a sore knee, and given his past medical history, a trip to the DL would not be a surprise. The current roster has holes everywhere, but hopefully most of the needs will be filled as the injured players return.

Assuming that everyone returns healthy, the one trade I would make to improve the team would be for a 3B. Collectively, the LA 3Bs are 6th worst in OPS in the majors. The in-house candidates all have flaws. Nakamura couldn't hit, Antonio Perez has been shaky defensively, Saenz has the mobility of an oven, and the rest are AAAA players. It's also hard to say how effective Valentin will be when he returns in about a month. It's possible that he will not be 100% with a surgically repaired knee. Even if fully healed, he could be rusty after missing so much time. So trading for a veteran 3B with a decent bat and glove might be a prudent move.

In my opinion, a top-of-the-rotation SP or a power bat such as Dunn are the only acquisitions for whom DePodesta is willing to give up the top prospects. A 3B upgrade could be a short term rental who would cost little in terms of talent. LA probably has enough payroll space to take on a medium-sized contract.

Here are my thoughts on potential 3B acquisitions. The salary data is from Hardball Dollars. Fielding and hitting stats are from ESPN. Line drive %, BABIP, and and a predictive measure called PrOPS are from the Hardball Times.

Here is a graph mapping the major league hitters' line drive % versus BABIP as of 6/24/05. Certain third basemen are noted in color. Antonio Perez and Jeff Cirillo were crudely drawn in by hand as they did not have enough at-bats to be "qualified". 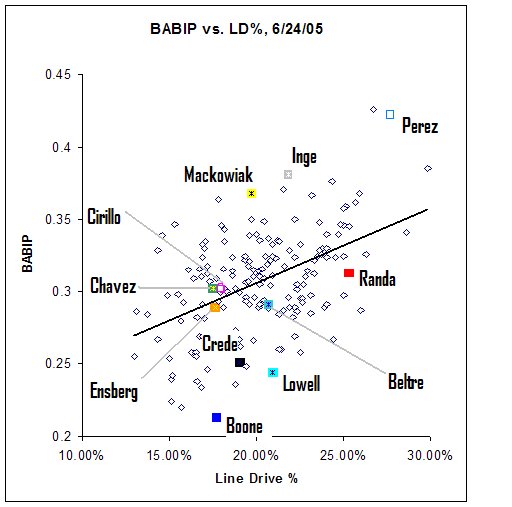 Note how "lucky" Antonio Perez has been so far. His .330 BA could plummet, just as Izturis' BA dropped this month. If so, Perez's value would drop, as hitting is his only notable skill; his fundamentals aren't exactly stellar. It might be a good time to "buy low and sell high", trading Perez ideally for an undervalued 3B.

Likewise, Inge's and Mackowiak's luck could run out soon. On the other hand, Crede, Lowell, and Boone look to be "due".

A couple of months ago, the folks at the Hardball Times came up with a predictive measure called PrOPS, which more or less predicts what a hitter's OPS SHOULD be had he gotten an average amount of luck. This approach is nice because it incorporates ball-in-play events with defense independent events, mainly Ks, BBs, and power. Here are the same players' PrOPS compared to their actual OPS, as of 6/19/05. 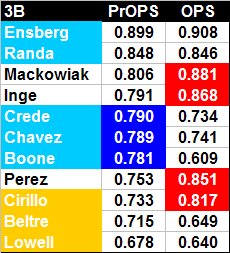 As with the line drive graph, Antonio Perez is due for a tumble. (Trade bait!) Inge and Mackowiak also have been rather lucky, along with Cirillo, who is having a huge rebound year. Those players' values are probably overinflated, as their numbers might come back down from the stratosphere. Unlucky or not, Beltre and Lowell have not justifed their large contracts.

That leaves 5 names who might be undervalued. Chavez is a great player, but his large contract probably makes trading for him difficult. Crede has a small contract and is due for some luck, but it's unlikely the White Sox would trade him given their record, which is the best in MLB. If anything, the White Sox will amass more talent, not trade them away.

Boone has been a distaster with the bat, but he is my pick out of the group, mainly because he probably has a low price tag given his lack of production. According to the graph above, Boone may be the unluckiest hitter in baseball, and is seriously due. Indeed, he appears to be headed towards a rebound, as he has a healthy .918 OPS so far this month. With the return of OF Gerut from the DL, the Indians' outfield looks a bit crowded. By trading Boone, Cleveland could put Casey Blake at 3B and save a few bucks in the process.

The problem in trading with Cleveland is the standings. The Indians are currently 12.5 games out of first place in the division, but only 4 games out of the wild card. Who knows whether they'll be buyers or sellers at the end of July. If they're sellers, some second-tier prospects might do. If they're buyers, they are probably looking for an established right-handed power bat to replace Juan Gonzalez, who is once again on the DL. If Cleveland wanted Olmedo Saenz in exchange for Boone and a reliever, I would do that trade as long as Bradley and Drew prove healthy. Better yet, a straight swap between Boone and Perez would give the Indians a leadoff hitter with a "high" OBP.

Saenz or Perez might seem a steep price to pay given their levels of production, but trading for Boone could be similar to the Jason Phillips trade: acquiring an "unlucky" player due a major rebound for a "lucky" one, while giving the in-house prospects another year to develop. Since the top 3B prospects such as LaRoche or Guzman probably will not be ready until 2007, holding a $4.5 million 2006 team option on a starting 3B might not be a bad thing.

2) Cincinnati, where there's going to be a fire sale soon.

Randa might be a perfect short term upgrade, and is probably available on the trade market immediately. For the Dodgers, he could be this year's Steve Finley. Cincinnati is probably handing the postion next year to top prospect Edwin Encarnacion, and can fill the position in the meantime with Aurillia or Freel.

Given the current turmoil in Cincinnati, no transaction is off limits. Unfortunately Cincinnati probably wants young pitching in exchange, and that's proably what DePodesta does not want to trade away, unless he gets in return a premium player such as Dunn. A megadeal between LA and Cincinnati would not be a surprise.

3) Houston, which is out of the playoff picture.

Roy Oswalt would be nice, but such a trade would be a whopper, as he would be very expensive to acquire. Ensberg may not the Astro that everyone is clamoring for, but he would represent a serious upgrade, as he is currently 3rd in OPS among qualifed third basemen. He is also arbitration eligible and cheap, salary-wise. In other words, acquiring Ensberg would be fairly costly.

Houston has Mike Lamb, who could fill in at 3B, but their outfield looks relatively thin next year. Biggio is in the last year of his contract, and the Lastros have young 2B Chris Burke playing LF. Bagwell's career is in jeopardy after undergoing season-ending surgery on his shoulder, and OF Berkman has shifted to 1B for the time being. They might want a young outfielder with pop, along with some prospects. A trade for Ensberg involving Jayson Werth, who is finally displaying the power seen last year, could be a good match for both teams.

All this is if and only if Bradley, Drew, and Ledee get healthy soon. Otherwise, the hole created by trading Werth or even Saenz could be bigger than the one made up at 3B.

Sunday Edit: Never mind on Werth. A 2 HR game doesn't make a career, but LA desperately needs his power bat now that Saenz was seen limping in the 9th inning. Of course, judging Werth on one game would be similar to touting Grabowski for a Gold Glove for that fantastic diving catch today...
# posted by secondhandsmog @ 10:53 PM